In the 1936 Olympic Games, all gold medal winners were also given an oak sapling. Christopher Boardman, the eldest son of the Boardman family who lived at How Hill, was the helmsman of the Lalage, a gold medal winning yacht. The sailing races took place at Kiel. Christopher Boardman did not actually go to Berlin to pick up his medal, but one of his team members, Miles Belleville, did – receiving gold medals for all the crew, together with an oak sapling. As Christopher was the helmsman, it was decided to plant the tree at his home at How Hill in Ludham and in September 1936 the sapling was planted at the back of How Hill House.

Just a few years later, the tree was nearly destroyed by a German bomb that was dropped by a warplane returning to Germany. Shrapnel from this bomb was found embedded in the north side of How Hill House but the tree was unscathed!

Back in 2013, the tree was beginning to suffer and was heavily pollarded to try and save it. Unfortunately it was unsuccessful. Following the death of the tree, it emerged that honey fungus had been responsible.

It was decided that a fitting memorial to its history was needed and, in early 2017, Arnie Barton (a chainsaw carver from North Norfolk) was commissioned to undertake the work. The remnant of Hitler’s Oak is now a magnificent reminder of the gold medal winning sailors from the 1936 Olympics. The carving is at the back of How Hill House for all to see.
*In 2018 Hitler’s Oak became known as the Olympic Oak.

Read more about How Hill’s history. 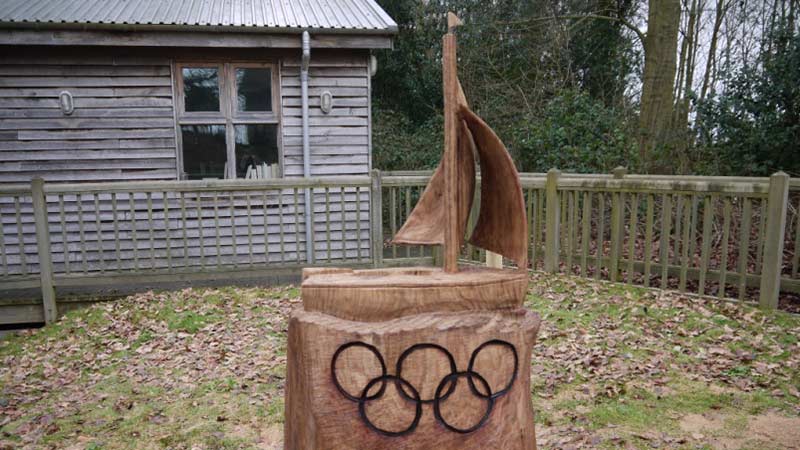