It has often been claimed that the view from How Hill is the best in the Norfolk Broads.The house sits at the summit of a mighty hill (rising some 16m above sea level) with views out over the river Ant, marshes, woods, meadows and windmills.

But an even loftier viewpoint is afforded from the scaffolding which currently wraps around the north side of the house. Thatcher Mick Aldred last replaced the sedge ridge on the thatched roof twenty years ago, and now he’s back to do it again. He says this is the highest roof he has ever worked on, and on a fine day “it’s like heaven up there.” With binoculars it is even possible to see the spire of Norwich Cathedral, nearly eleven miles away.

Mick’s dad and brother are also thatchers. Once when they were cutting reed on the marsh beyond Turf Fen Mill their reed cutting machine fell into a hole. They later heard that the hole is one of several craters made by bombs dropped during the second world war.

The locally grown sedge, secured with a lattice of brotches (short lengths of split hazel wood) is only expected to last around twenty years, whereas the reed which makes up the majority of the roof lasts much longer –  in this case  sixty years and counting. By the time the work is finished in July the scaffolding will have been erected in three different positions and over nine hundred bunches of sedge will have been used. 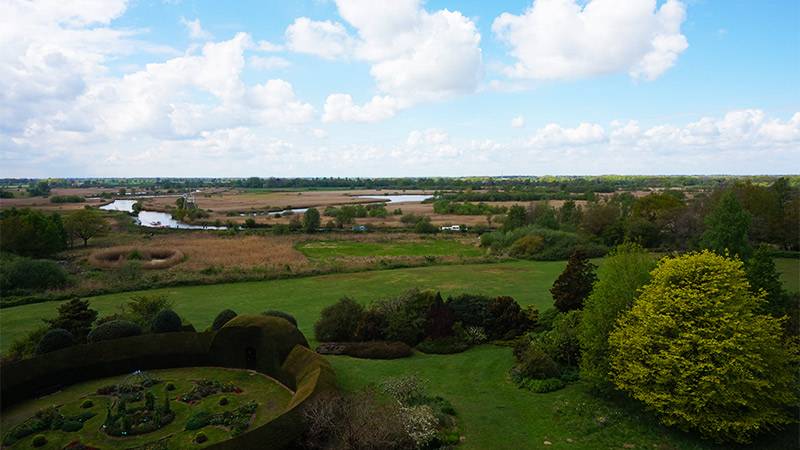