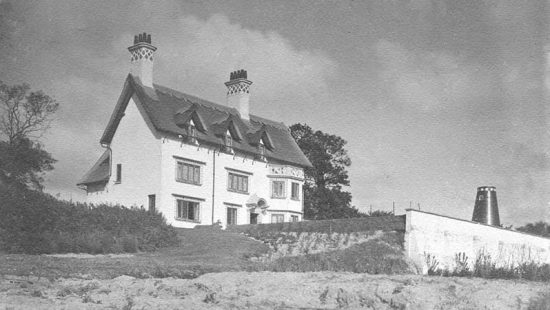 Around 1900, Edward Thomas Boardman, a prominent Norwich architect, seeking a country retreat, purchased some 800 acres of marsh, pasture and farmland bordering the River Ant north of Ludham. The most striking feature of this estate was a knoll of glacial sand and gravel some fifty feet above sea level, one of the highest points in the entire Broads district. Mr Boardman chose this spot to build an imposing thatched mansion in 1905, which he and his family used initially as a holiday home. During the first World War the house was extended and it became the family home in 1918.

Outside Mr. Boardman planted two quite separate garden areas. The formal gardens, to the front of the house, are dominated by sculptured hedges of yew, creating a maze-like effect. At the foot of the hill are the celebrated secret gardens, a series of inter-connected ponds and channels surrounded by raised peat beds. In spring these gardens are a tropical blaze of colour, as the various azaleas and rhododendrons come into flower. Additionally there are specimen trees, including a dawn redwood, swamp cypresses and pin oaks, together with several exotic shrubs. The waterways are home not only to lilies but also to plants which were once common in the Norfolk Broads, but have now become scarce in Broadland because of water quality problems.

Mr. Boardman planted 70,000 trees at How Hill, and established a fruit farm. However, when he died the estate was split, and eventually in 1966 the marshes, woodland and gardens were bought, with the House itself, by Norfolk County Council Education Department. Their holding represented all the wilder parts of How Hill, as well as the gardens, and covered a total of 360 acres.

For many years the ‘Olympic Oak’ (formerly known as ‘Hitler’s Oak’) was a notable tree on the estate. In 1936 the eldest Boardman son, Christopher competed in the Berlin Oylmpic Games, where, along with his team he won a gold medal for sailing. Adolf Hitler presented all medallists with an oak sapling, and Christopher chose to plant his behind the house at How Hill. The tree grew happily for many years, but was eventually killed by honey fungus. It was decided that a fitting memorial to its history was needed and, in early 2017 the remaining tree stump was carved into a sailing boat and olympic rings.

How Hill House is now listed, Grade II, and there are four other grade II listed buildings on the estate. These include three drainage windmills, Turf Fen, Boardman’s Mill, and Clayrack Mill. Each is unique and under the care of the Norfolk Mills and Pumps Trust. There is also a former marshman’s house, called Toad Hole Cottage, which has been refurbished to give an impression of the old way of life of a Broadland marshman. Toad Hole Cottage is run by the Broads Authority as a museum and Broads information centre.

The 222 acre marshland nature reserve at How Hill is a Site of Special Scientific Interest, and was declared a National Nature Reserve in 2006. It produces an annual crop of reed and sedge for thatching, and provides a habitat for swallowtail butterflies, marsh harriers and other wildlife. The estate includes Crome’s Broad, a secluded shallow broad which has clear water, which is therefore suitable for the growth of water lilies and other aquatic plants, unlike most of the larger broads.

How Hill as an Environmental Education Centre

For 17 years Norfolk County Council ran a residential education centre at How Hill, but it was closed in 1983 for financial reasons. After a public campaign, the Centre was saved by a consortium led by the Norwich Union Insurance Group and the Broads Authority.

The How Hill Trust, set up in 1984, is a unique organisation, which for 18 years held a lease on the house from the Norwich Union Insurance Group. In April 2002, the Company handed over the unfettered freehold of the house and gardens to the Trustees.  The Trust is responsible for its own finances, and is an entirely independent registered charity.

The main role of the Trust is to provide Environmental Education by means of residential field courses and day visits for school children and young people. The children who come here explore our woods and marshes, find out about the reed harvest, visit the windmill and have a trip on the river. They try their hand at thatching and an assortment of other activities and crafts. Above all, they gain an insight into the fragile world of the Broads and are left with memories of having fun with nature which we hope will spark a lifelong respect for wildlife and the environment.

For lots more detailed information and local history you may like to buy a copy of the book ‘How Hill, Heart of the Norfolk Broads’ by former Director of the Trust, David Holmes. Contact us for details.